The Renewable Fuels Agency (RFA) (http://www.dft.gov.uk/rfa/) has been set up by the UK Government to implement the Renewable Transport Fuel Obligation (RTFO) (http://www.dft.gov.uk/rfa/aboutthertfo.cfm), which came into force on 1st April 2008. The RTFO obliges fossil fuel suppliers to ensure that by 2010 biofuels account for 5% by volume of the fuel supplied on UK forecourts. The purpose of the RTFO is to “reduce the UK’s contribution to climate change and its reliance on fossil fuels”. The RFA publishes updates on the progress of the RTFO. These include monthly reports on progress on achieving compliance with sustainability criteria and quarterly reports to the Department for Transport and annual reports to parliament. All reports are available on the web site.

With serious questions being raised about the impact of biofuels on food prices, farming and the environment in general, it will be interesting to see how long this all carries on.  The RFA’s first monthly report has just been published and covers the period 15th April – 14th May 2008. The press release contains some good summary statistics for those of us who need to get hold of such data in a hurry. There are ‘associated files’ (PDF and an Excel spreadsheet) that contain more detailed information. 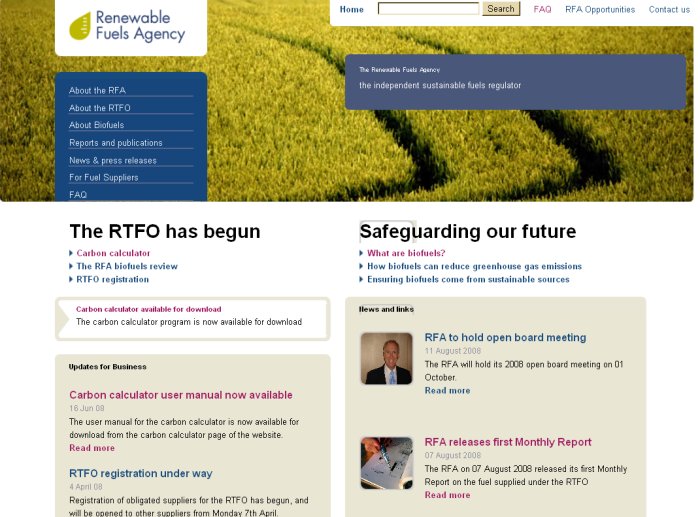