Phil Bradley was not very complimentary in his blog about Tinfinger, a people search tool. His search on Gordon Brown, the current UK prime minister, came up with an entry that had clearly been computer generated and which was full of inaccuracies. Tinfinger’s Paul Montgomery confirmed in a comment to Phil’s posting that a lot of the content is pre-generated, but that the intention is for people to use that raw data to write full profiles.

It seems that Phil’s posting encouraged someone to update and correct Gordon Brown’s profile as the information is now correct – or was when I looked at it. Tony Blair’s is a different matter, though. There is no profile but there is a picture and several “tags”:

“Blair has the name of The Rt Hon. Tony Blair. Blair has the type of Alumni of the Inns of Court School of Law. Blair is on the Sedgefield (UK Parliament constituency) list. Blair is listed with the external id of 0086363. Blair came before “(constituency created)“. Blair is an devotee of the Anglican religion. Blair started in 1983. Blair was preceded by John Major. Blair’s spouse is Cherie Blair. Blair has the order of Prime Minister of the United Kingdom. Blair’s term started on 1997052. Blair represents the constituency of Sedgefield (UK Parliament constituency). Blair’s deputy was John Prescott. Blair’s job is politician.”

I would love to know from where that information was collected! It is early days for Tinfinger and hopefully people will get on board and start editing and creating more accurate profiles. At present it is an example of how wrong information can be when it is automatically generated, and the importance of being aware of how content is compiled. 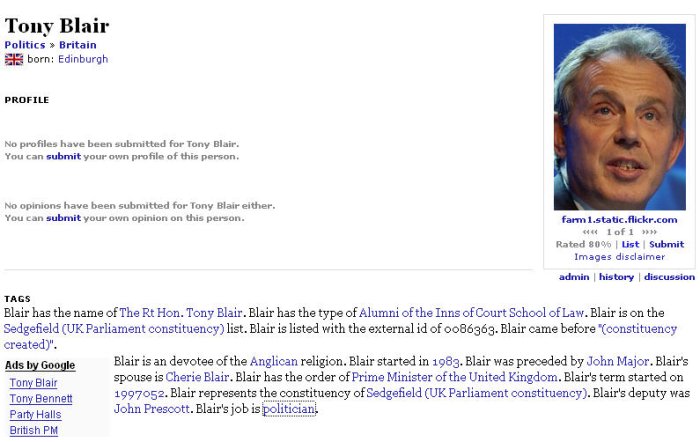